Earlier this year, SSC Underground was contracted to install 900 feet of 24-inch casing to carry a 16″ PVC waterline under East Via De Ventura Road in Scottsdale, Arizona.

SSC was uniquely qualified to construct this large specialized project.

WATCH THE VIDEO BELOW:

The water line needed to be installed underneath a very busy roadway that also served as an on and off-ramp to major state freeway, Arizona Loop 101. The construction site was also directly adjacent to 2 very busy entertainment venues, the OdySea Aquarium, and Butterfly Wonderland. It was very important that the construction method did not involve open cutting or trenching the roadway, which would have added more time to the construction process, and caused major impacts to traffic and businesses in the area.

SSC’s Executive Vice President, Arvid Veidmark III, consulted on the design with the general contractor and owner for over 1 year. Arvid recommended the Horizontal Directional Drilling trenchless construction method. This method allowed the entire construction project to be completed in less than 6 weeks, with very minimal road closures.

The Horizontal Directional Drilling method was also the most appropriate method because of the depth and distance the utility line needed to travel. This was feasible because of the good Class-A soil conditions in the area, which was mostly free of cobbles and caliche.

Other methods of construction would have been much more time intensive and costly and would have caused significant noise, road closures, and traffic delays.

This project was also complex due to the number of entities involved in the design, permitting, planning, and construction phases including the general contractor, DPP-MGC, the City of Scottsdale, the Salt River Pima Maricopa Indian Community, and various specialty sub-contractors. Additionally, special sensitivity training, waste management, and traffic control were required for this job by tribal regulations.

Initially, SSC’s vacuum division was dispatched to core the soil and locate existing utilities. This helped the team verify the path of the proposed bore was clear of utility conflicts and confirm the placement of entry and exit pits.

SSC’s construction crews then began to pre-assemble the 900 feet of 24-inch steel casing by staging sections on wooden skids and welding them together. The 900-feet of PVC waterline was then fused together for installation, and casing spacers were assembled.

The Salt Riva Pima Indian Community allowed SSC crews to utilize a closed and undeveloped section of roadway, directly south of the job site as a staging area. This created an overall construction site footprint over three-quarters of a mile in length, which provided crews with enough space to pre-assemble the full length of casing and waterline. This was critical to the success of the project, and saved a significant amount of time, as the pre-assembly resulted in an extremely efficient pullback and installation process.

SSC was able to the complete the pullback utilizing their 2 track hoes, 2 backhoes, and pipe rollers to move the casing and waterline from the staging area to the pullback pit for install. Once the installation was completed, the pits were backfilled, slurried, and sealed. 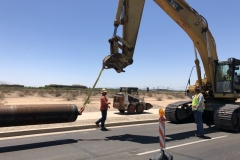 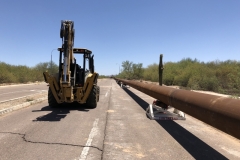 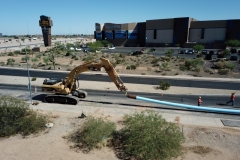 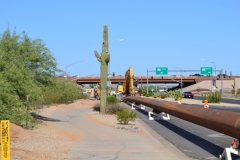 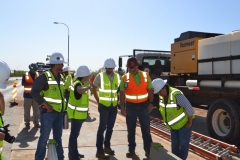 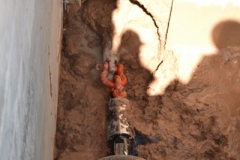 “This was one of the more exciting projects SSC completed this year, because of its size”, said Abe Veidmark, Vice President of SSC and Superintendent on this project. “We had a chance to utilize our drone and capture the overall size of this project on video, which cannot usually be seen from a ground level view”.”We are thankful to have been selected for this project, and we look forward to working on other projects in the City of Scottsdale and on Salt River Pima Indian Community reservation land.”

What Our Clients Say: